Visit of the Minister of Energy and Industry H.E. Mr. Damian Gjiknuri at the Antea Cement plant 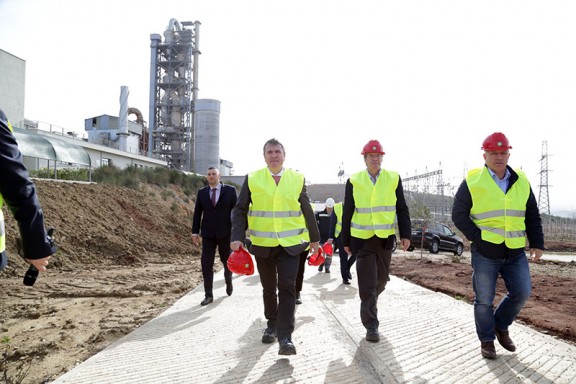 The Antea Cement Company, part of the Tiran Group, welcomed the special visit the Minister of Energy and Industry H.E. Mr. Damian Gjiknuri and his senior staff. ANTEA Cement is the largest Greenfield investment in Albania with a comprehensive value of more than 200 million euro and one of the leading industrial companies operating in the country. During its operation in Albania, Antea Cement has positioned itself as leader in environmental sustainability and corporate social responsibility.
During his visit in the plant, Minister Gjiknuri had the chance to inspect in person the environmental rehabilitation projects implemented by Antea Cement and he was introduced to the high level standards offered by a company that operates within the Albanian territory. Antea Cement has rehabilitated and reforested a total area of 40,000 meters square, planting approximately 5,000 new trees combined to additional vegetation extended through the entire area.
Antea Cement has demonstrated a remarkable due diligence over the entire area subjected to its operations, taking special care to plant autochthonous plant typologies of the area with the aim to guarantee future adaptation and sustainability of the flora. Special attention was dedicated also to the species in danger of extinction. Antea Cement is the only company in the Albanian territory to have implemented the Environmental Management System ; ISO 9001; OHSAS 18001:2007 and more recently SA 8000.
“The environmental plan for the rehabilitation of the carriers was designed prior to the beginning of their operational utilization and the rehabilitation of the area has started from the first year of the carrier utilization. All the projects performed have abided by the area’s biodiversity studies with the aim to protect the species in danger of extinction”, said Ms. Stela Pepa, Environmental Manager in Antea Cement, who explained to Minister Gjiknuri other relevant details about the rehabilitation process.
The General Manager of Antea Cement, Mr. Adamantios Frantzis accompanied Minister Gjiknuri in the internal areas of the factory plant as well as in the areas where the environmental rehabilitation has been completed. “Antea Cement is not only the biggest Greenfield investment in Albania, but we also aspire to become the leading company for the implementation of sustainable environmental practices and solutions”, declared Mr. Adamantios Frantzis, General Manager of Antea Cement.
In this regard, Minister Gjiknuri declared that all the companies operating in the Albanian territory shall pay special attention to meet the highest European standards. “The scope of this visit is the promotion of such an important activity as carrier rehabilitation. This is one of the best examples of Albanian industry and the type of investments we want to promote, an investment that abides by the best environmental standards. The MEI is currently discussing fiscal facility mechanisms and future facilitation of the estimation of other financial components. Once again, let me thank the company for the investment and the right approach towards the environment”-said the Minister of Energy and Industry. According to him, the MEI has submitted a proposal to the Ministry of Finance with several facilitating measures for the industrial sector, which is an important factor linked not only to employment but it also constitutes a potential contribution to the revenues of the state budget.
In conclusion of his visit, Minister Gjiknuri and Mr. Frantzis symbolically contributed to the environmental rehabilitation of the area by planting two young olive plants.