Inauguration of the Sports Corner

Road safety, a social responsibility of us all!

ANTEA Cement is one of the companies that contributed to the creation of a 5500 m2, multidimensional space in Tirana.

Residents of Tirana from now on will have another recreational green space located on the outskirts of the Albanian capital, near Farka Lake. The new park, named the “Hellenic Park”, is a recent investment with the support of the Greek Embassy in Tirana and the Municipality of Tirana. ANTEA Cement is one of the companies which has contributed to the implementation of the “Hellenic Park”, as part of its community support programs.

The inauguration ceremony of the park was attended by the Ambassador of Greece accredited to Albania, Mrs. Sophia Philippiddou, the EU Ambassador, Mr. Luigi Soreca, the Mayor of Athens, Mr. Costas Bakoyannis, the Mayor of Tirana, Mr. Erion Veliaj, and other notable dignitaries, senior officials, and politicians.  The ceremony was attended also by ANTEA Cement CEO, Mr. Mario Bracci and the Director of the Factory, Mr. Theodore Baltas, as well as other representatives of Greek businesses operating in Albania.

In her opening speech, the Greek Ambassador to Albania, Mrs. Philippiddou, thanking all the participants, stressed out that this special day coincides with important holidays in Greece as well.

The “Hellenic Park” is located in Farka, only 12 km from the center of capital Tirana, and covers an area of 5500 m2, conceived as a multidimensional and comprehensive space for sports activities. This Park is decorated with typical Mediterranean vegetation, as a unifying element between Albania and Greece. This park will serve for entertainment, sports, culture, and other recreational activities. The two mayors also unveiled the inauguration plaque of the park while thanked the companies, which made possible this green space in the capital. 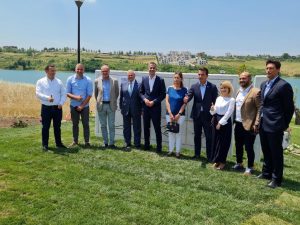 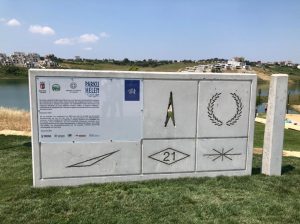